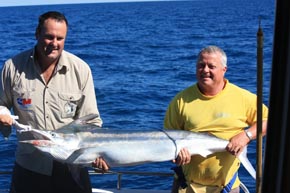 Magnetic Island and Townsville are situated right on the door step of the world famous Bowling Green Bay juvenile Black Marlin fishing grounds.  Between May and October, and peaking from July to September, you can experience some of the best light tackle Marlin fishing available anywhere.  Besides their spectacular fighting ability these smaller fish give great aerobatic visual displays - sometimes jumping 30 to 40 times during a fight - and make a memorable photo to take home when landed on board prior to release.

Larger Black Marlin, up to and above 1,000lb, frequent the local waters of the outer reef off Townsville most of the year round.

Between September and December the Ribbons Reef between Cairns and Lizard Island become the home of the Giant Black Marlin.  This location is known worldwide as the premier spot to target and catch large Black Marlin on a regular basis. The fish are found as far South as Myrmidon Reef off Townsville, where you can experience  great big fish action locally, Alternatively, you can increase your chances of landing a thousand pound plus Black Marlin by fishing your way north.  Utopia Charters has live-aboard luxury charters available to accommodate the most diehard fisherman.

The black marlin is a species of marlin found not far from the surface in the tropical and subtropical Indo-Pacific oceans.  It is a large commercial game fish with a maximum published weight of 750 kg, but greater weights are known.  It is one of the largest bony fish species.

The black marlin's body is blue-black above, and a silvery white below, sometimes with light blue vertical stripes.  The first dorsal fin is blackish to dark blue and the other fins are dark brown with tinges of dark blue.  The pectoral fins cannot be folded back flat against the body.

Black Marlin feed primarily on cephalopods and fish, especially tuna, which they stun and kill with side-to side-slashing movements of their bill.